Hearing the word, the virus one instantly comes to think of sickness, disease and death. The extent of public fear can be estimated from the fact that even the slightest mention of the word “virus” creates alarm and panic in the general population. Awareness and fear of viruses has generally increased among the general population due to the recent coronavirus outbreak and the AIDS epidemic in the 1990s.

However, not all viruses are the same. Bacteriophages are a type of virus that occur naturally in the environment and only affect bacteria. Although it may seem quite strange, these viruses pose no danger to humans. Bacteriophages after their discovery at the beginning of the 20th century have been adequately studied. Foods that reach us packaged or on the shelves in grocery stores, although stored efficiently, still contain small amounts of bacteria. Even these minute amounts of remaining bacteria have the potential to cause widespread illness and even death in consumers.

According to an estimate by the World Health Organization (WHO), 600 million people become ill after consuming contaminated food and 420,000 people die each year. Despite traditional approaches to improving food safety, foodborne illnesses are common.

A new approach to fighting foodborne illnesses is to use bacteriophages targeting specific pathogens in food. There have been different approaches to employing bacteriophages in this process. These have been used to sanitize equipment in the food industry and also to increase the shelf life of food products against spoilage. In one approach, bacteriophages are mixed into animal forage and feed prior to slaughter. These viruses reach the gut of farm animals and kill the bacteria residing there, greatly reducing the bacteria in the meat subsequently obtained from that farm animal. Then there is another technique in which bacteriophages are sprayed on already harvested meat, fruits and vegetables during food processing. This prevents any airborne bacteria from growing on the food product, thus keeping it bacteria-free. 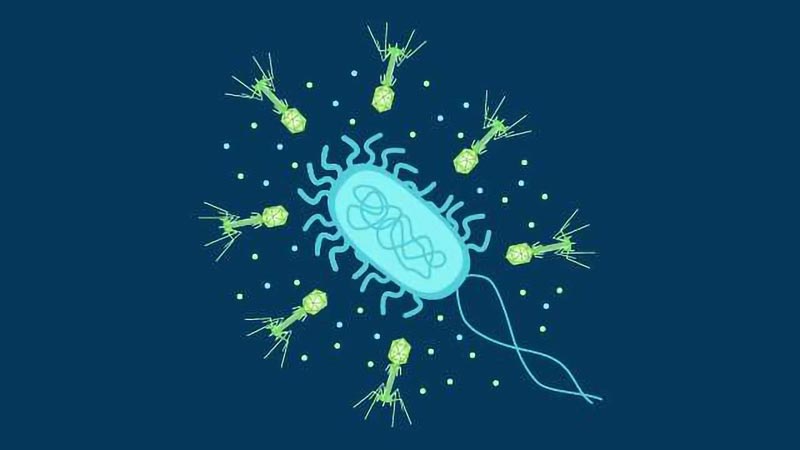 In addition to these, there is another approach in which the bacteriophages are rooted in the packaging material. The presence of these bacteria-specific viruses in the packaging kills any remaining bacteria cells in the food product and prevents any airborne bacteria from growing there. To extend the expiry date of a food product, bacteriophages are sometimes added directly to the food product. Knowing about the presence of these bacteriophages in food can embarrass the consumer, but don’t worry because scientific studies have proven that bacteriophages do not cause any toxic effects on humans. In addition to this, bacteriophages also do not affect the taste of the product and are also resistant to food processing procedures. Nevertheless, it is a recently developed approach, with the first ListShieldTM bacteriophage product approved for use in 2006 in the United States for the control of bacteria in poultry and meat products. Seeing its potential benefit, other first world countries like Canada, Israel, the Netherlands and Australian authorities have also approved the use of bacteriophages in the food industry. This can also be seen on the Bacteriophagenews.com website containing a database of commercially available Bacteriophage products. Apart from its use in the food industry, bacteriophages are also used as an alternative to antibiotics. Due to the wide spread and unregulated use of antibiotics over the past decades, many bacteria have developed resistance against the original antibiotics. This means that the new bacteria can no longer be killed by the old antibiotics. Bacteriophages are considered as a potential alternative to antibiotics. Thus, the day is not far off when bacteriophages would have replaced half of the existing antibiotic practices. This has also been called “The Dawn of Bacteriophages”. Nevertheless, very soon you may be eating the delicious products containing these beneficial viruses even here in Pakistan.

The author is a scientist and a published author. Currently, he is an assistant professor at the University of Management and Technology. He can be contacted at [email protected]

No-Bake Kitchen: National White Wine Day is a time to count the blessings | To eat